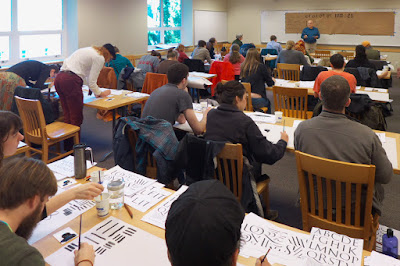 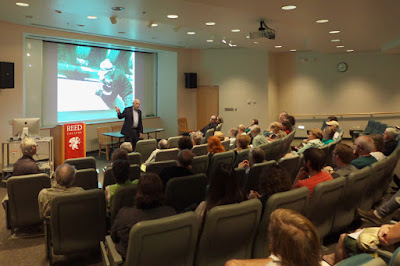 Brush-Written Imperial Romans
Paul Herrera
Cost: $100
Maximum Participants: 20
Location: Art Institute of Colorado
This workshop will guide you through a hands-on understanding of the Imperial Roman Alphabet as you utilize an inside-out approach to these timeless letterforms. You will learn the special characteristics and ‘personality’ of the brush as contrasted with hard-tool calligraphy while practicing the essential elements of the classical Roman. Before the workshop is done you will move on to writing out the entire alphabet in the same manner as the ancient Roman inscription maker would do prior to cutting the letters in stone. A short inscription cutting demonstration will be provided as an addition to the class.

During the Weekend (TBA):

The Life and Times of Father Edward M. Catich

An illustrated lecture by Paul Herrera
Reverend Edward M. Catich has an international reputation as a calligrapher, teacher, scholar and artist. He was also a professional Chicago sign painter and musician in the 1920’s while he attended the Art Institute. In addition to being an artist, Catich was also an accomplished musician! Many of Father Catich’s works will be shown as illustrations of his life during the presentation. Paul Herrera was a student, apprentice and friend of Father Catich. He traveled with him, worked with him and taught with him at the Davenport Municipal Art Gallery in Davenport, Iowa.

Posted by Paull Herrera Calligrapher/Artist at 12:32 No comments:

Click on the logo to visit the ALL site.

Paul with Catich Cast of The Trajan Inscription in Rome.

This is the only direct cast made of The Trajan Inscription in Rome, the finest example of Roman Imperial Brush Writing. The Cast is owned by RR Donnelley Corporation in Chicago, but is not on public view at this time. the Art Legacy League is attemptiong to help the company find a suitable home for the cast where it can be on public display and be accessible to scholars.